One of the most important, and often overlooked, aspects of an aquarium is managing the nitrogen cycle (sometimes also called the biological cycle). Most new hobbyists do not understand the difficulty of keeping fish alive in a small environment (your fish tank) and usually chalk up their fish deaths to complete mystery or any number of misdiagnosed illnesses. Experienced fish keepers all know, at least on a basic level, how the nitrogen cycle works and how important it is in keeping their aquariums healthy, clear, and headache free. That’s not to say there won’t be other problems you might encounter in your aquarium, but once you achieve an understanding of the nitrogen cycle you will be better equipped for diagnosing disease while ruling out basic/common husbandry issues. I am going to try to keep the science to a minimum in this post so that any new hobbyist can quickly learn without wading through equations and organic chemistry diagrams. You can find plenty of intricate details out there on the nitrogen cycle if you are into that sort of thing, and maybe one day I will do a much more in-depth post on that, but for the purposes of keeping fish alive this will be all you need to know. 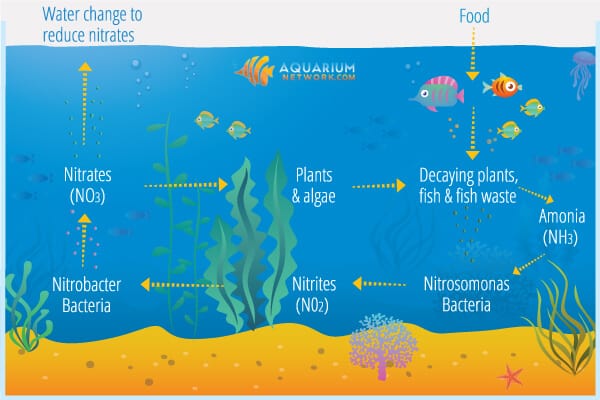 The nitrogen cycle requires bacteria to be present in your aquarium in order for it to work properly. These bacteria work to break down organic waste and make them less toxic for your fish. There are a few different bacteria that work together in different steps:

The first step is the introduction of ammonia(NH3) into the water. Ammonia comes from organic waste such as uneaten food or fish waste. The more you feed your fish the more ammonia will be introduced into your aquarium. This is why a responsible fish keeper will tell you that less food is always better than more food. Ammonia can be very toxic to your fish and can reach deadly levels very quickly if it is not passed through to the other steps of the nitrogen cycle. Ammonia is only toxic when the pH is higher than 7.0 though, because below 7.0 pH the ammonia actually turns into the ammonium(NH4) cation which is not toxic to your fish. This is part of the reason that fish can be shipped in a bag across the world on an 18 hour flight and stay alive. The water in the fish bags actually drops in pH as the ammonia builds up from their waste. When you take a fish home that has been in a bag for longer than an hour or so (could be much less if they happen to purge as soon as they go in the bag) you need to acclimate them to your tank’s pH VERY SLOWLY so that the ammonium in the bag does not turn into ammonia while it is still in your fish’s gills. This is why the friendly clerk in your LFS (Local Fish Store) will tell you to drip water from your tank into the bag, or a separate container with your fish in it, very slowly. Listen to them, it just might save your fish’s life.

Once you have some ammonia in your tank, a bacteria called nitrosomonas will start to colonize. These bacteria grow exponentially, but not necessarily very quickly.  This means the colony size  doubles every 10-15 hours depending on a number of factors like temperature, pH, dissolved oxygen, and other micro nutrients which help the colony grow. For optimal growth of nitrosomonas bacteria you should have a pH of 7.8-8.0, a temperature of 77-86 degrees (warmer is better to start off your cycle), dissolved oxygen should be at least 80% saturation, and you need plenty of ammonia for the Nitrosomonas to use for energy. Your bacteria colony will begin changing your Ammonia(NH3) into Nitrite(NO2) through a process called oxidation. The bigger your bacteria colony, the quicker it can handle large spikes of ammonia (from a heavy feeding or a fish death). Nitrite is also very toxic to your fish, and it is important to make sure your bacteria cycle is complete, and the nitrite is gone from the aquarium before adding fish.

Once your Nitrite levels begin to grow the second type of bacteria will begin to form. This second bacteria is called Nitrobacter and it breaks down your Nitrite (NO2) into Nitrate (NO3). Nitrobacter will not begin to colonize if there is still ammonia in the system. Nitrates are not as harmful to your fish as the first two, but in large amounts it will eventually become toxic. Nitrobacter has a lower optimal pH range than Nitrosomonus bacteria but not by much. There is some disagreement in the scientific community as to the exact optimal range for Nitrobacter growth, but most sources put it between 7.3-7.8. This means that 7.8 would be a good pH to start off with in saltwater aquaria and can be increased after the bacteria colony has grown large enough to handle fish. Temperature requirements for Nitrobacter are the same as for Nitrosomonas (77-86 degrees).

There are a few different ways to remove nitrates, but the most effective way to do so is through regular partial water changes. By changing between 20% of your aquarium water every 2 weeks you are able to dilute the nitrates that have built up in your aquarium. When doing water changes you should use a siphon tube like this one so you can clean out any built up waste or food particles in your gravel or sand. These will break down into ammonia as they decay and eventually become more nitrates for you to remove, so it is best to get them out beforehand.

For freshwater aquariums you are able to export your nitrates through live plants since plants will absorb nitrates and use them to grow. As the plants grow you can prune them essentially removing the nitrates from your system. This method is useful, but very difficult to keep in harmony in such a small environment. In an ideal world, we could balance the amount of plants with the amount of waste produced by the fish, but that is extremely difficult to do, so water changes are still necessary in these types of aquariums.

Fun Fact: inside of the plants the nitrogen cycle actually ends up happening backwards. The plant breaks down the nitrates to nitrites, then to ammonia and uses the ammonia to build amino acids.

What does it all mean for my aquarium?

Due to the ammonia inhibition of the Nitrobacter colony it is difficult to find a product to cycle your aquarium and add fish immediately. However, you can cut down the amount of time required to cycle your tank with some of these products: Nutrafin Cycle, Seachem Stability, and Fritzzyme 9.  None of these products will completely cut out all of the work or issues described above, but they will cut down on the amount of time you need to wait before putting fish into your aquarium. Usually a natural cycle with no chemical additives can take between 4 and 8 weeks in optimal conditions. With these products the cycle can be reduced to 2-4 weeks.

How should I start up a new cycle?

Here is how I would start up a new tank quickly and without any loss of fish: 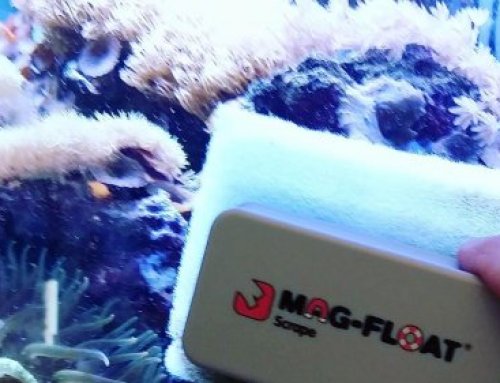 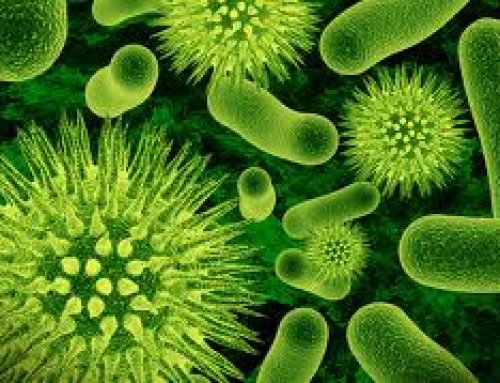 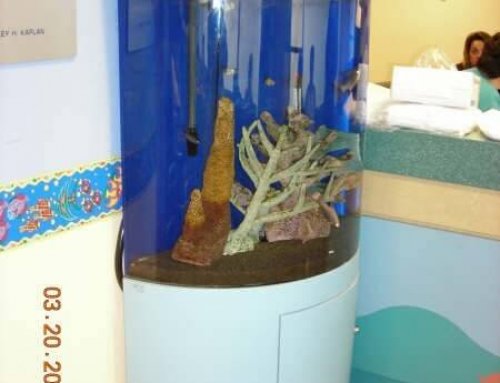 Choosing your Aquarium part 1 – Round Aquariums